Tennessee to Deploy New Smart Highway System | StateTech Magazine
Brad Freeze, TDOT's traffic operations division director, says there are big goals for the initiative. The first is to save lives and improve safety on the I-40 ...
Tennessee Interstate Project Completed Early | Transportation Today
Tennessee state officials are touting the early completion of the I-440 ... is a perfect example of the importance of investing in our infrastructure,”

Nashville Organization Working to Solve Transit Funding Challenge Amid Pandemic | WSMV
Since the pandemic began, WeGo has seen its ridership cut in half. Now empty seats on WeGo busses and star trains ...

TDOT Contractor to Complete New Traffic Pattern on I 75 North at the I 24 West Split in ... | TN.gov
As part of the I-75/I-24 design-build interchange modification project in Hamilton County, TDOT contract crews will complete ...

TRIP: Highways Face Congestion, Overuse, Deterioration | ASCE SmartBriefFrom 2000 to 2018, vehicle travel on US interstate highways increased 25%, but total lane miles on the highway system increased by 9%, according to a report by TRIP. Pavements on 11% of interstate highways are in poor or mediocre condition, and 27% of interstate bridges need to be fixed or replaced, TRIP says. Full Story: ForConstructionPros
Views expressed do not necessarily reflect the policy or opinion of TN Infrastructure Alliance, its staff or members.
Posted by TN Infrastructure Alliance on Tuesday, July 14, 2020 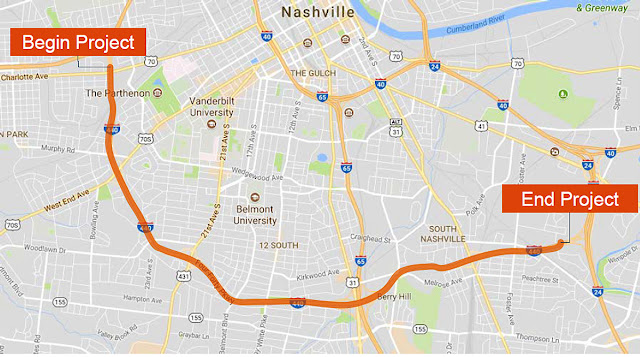 I-440 Project in Nashville Wraps Ahead of Schedule | Transport Topics
A major Interstate 440 reconstruction project has been completed ahead of schedule, Tennessee government officials recently announced.  I-440 is a 7.6-mile route that runs along the southern side of Nashville, connecting interstates 40 and 24. The $154.8 million project involved reconstructing the roadway and creating an additional lane, making the route three lanes in each direction in some areas to increase corridor efficiency. Work required deconstructing and reconstructing the entire route, which is highly trafficked.  “It is a through-route through downtown Nashville pretty much,” Steve Sellers, deputy director of state innovative delivery within the Tennessee Department of Transportation’s Construction Division, told Transport Topics. “Goods and services travel 440. I’m sure that a lot of freight moves on it.”

Tennessee DOT Celebrates I-440 Project Completion | The Trucker
... Clay Bright joined state and local officials today to celebrate the completion of the I-440 Reconstruction Project – the largest project in TDOT history.
Views expressed do not necessarily reflect the policy or opinion of TN Infrastructure Alliance, its staff or members.
Posted by TN Infrastructure Alliance on Tuesday, July 07, 2020

$1.5T Infrastructure Bill Heads to Senate | ASCE SmartBrief/Associated Press
The Democratic-controlled House approved a $1.5 trillion plan Wednesday to rebuild the nation’s crumbling infrastructure, pouring hundreds of billions of dollars into projects to fix roads and bridges, upgrade transit systems, expand interstate railways and dredge harbors, ports and channels.  The bill also authorizes more than $100 billion to expand internet access for rural and low-income communities and $25 billion to modernize the U.S. Postal Service’s infrastructure and operations, including a fleet of electric vehicles.  Lawmakers approved the Moving Forward Act by a 233-188 vote, mostly along party lines. It now goes to the Republican-controlled Senate, where a much narrower bill approved by a key committee has languished for nearly a year. Majority Leader Mitch McConnell, R-Ky., has not attempted to schedule a floor debate and none appears forthcoming.

“The left lane is for passing not for just driving and cruising in,” said Madison County Representative Chris Todd.  Tennessee’s Slow Poke Law is now expanding. In the past, the law prevented people from driving in the left lane of a highway with three or more lanes in the same direction.  “What we’ve done with this new law is we’ve reduced that to any highway that has multiple lanes, so two or more lanes going the same direction,” Todd said.

Governor and TDOT Commissioner Celebrate Early Completion of I-440 Reconstruction | tn.gov
... importance of investing in our infrastructure,” Governor Bill Lee said. “This roadway is a vital part of Nashville and Middle Tennessee's transportation ..

Across the State Line

Higher Gas Tax Pays Off with S.C. Roadwork | ASCE SmartBrief
South Carolina is adding 661 miles of paving work to $1.3 billion in road and bridge construction under contract, thanks to funding from a further gasoline tax increase of 2 cents per gallon. A higher gas tax started three years ago and has produced $372 million to fund projects.  Full Story: Moultrie News

TN Highway Patrol Issues Over 12000 Citations in the First Year of 'Hands-Free' Law | WBIR
Tennessee's hands-free driving law has made it a full year on the books, with Tennessee Highway Patrol issuing more than ...

TN Highway Patrol Issues Over 12000 Citations in First Year of 'Hands-Free' Law | WSMV
Tennessee's hands-free driving law has made it a full year on the books, with Tennessee Highway Patrol issuing more ... 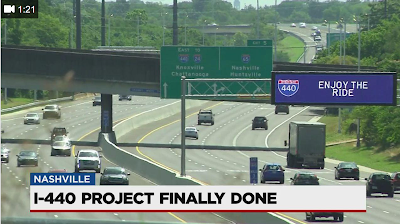 I-440 Fully Reopens After Largest Project in TDOT History | WSMV
Today, the Tennessee Department of Transportation officially completes the largest road project in the state’s history.  After about a year and nine months of steady road work and closures Nashville commuters can finally enjoy the new and improved Interstate 440.  All lanes of I-440 are back open and were completed ahead of schedule. News4 spoke with the project’s manager about what it took to get the job done.

Investment in America's Infrastructure: How Tennessee is Approaching Challenges and Solutions | Lexology 💬
In Episode 8 of BOOM! The Southeastern Commerce Podcast, Senator Becky Massey, Chair of the Tennessee Senate Transportation and Safety Committee, joins Brad Lampley and Chris Kane as we learn more about the infrastructure challenges and solutions in the state of Tennessee.

Members of the Senate Committee on Environment and Public Works have called on Congress to pass surface transportation reauthorization legislation before the Highway Trust Fund reaches insolvency. The fund is "rapidly approaching insolvency" as fewer Americans are driving due to the coronavirus pandemic, says Sen. John Barrasso, R-Wyo. Full Story: AASHTO Journal

A West Knoxville road is closed after heavy rains washed out dirt under the road, causing the pavement to cave in.

US Consumers Shying Away from Previous Travel Habits | ASCE SmartBrief

Less public transit and more cars and bicycles are in store for the indefinite future as consumers pummeled by pandemic fears and restrictions change their travel and commuting habits, according to a survey by parking application provider ParkMobile. Demand for recreational vehicles will increase as consumers seek alternatives to air travel, ParkMobile said. Full Story: AASHTO Journal

Since late March, TDOT crews have been able to take advantage of dramatically reduced traffic volumes on interstates across the state. Workers have been performing additional pothole patching and small paving projects to repair pavement impacted by winter weather. Under normal conditions, these operations are limited due to the severe traffic congestion they can cause during daytime hours. Traffic volumes are beginning to increase to more normal levels. While TDOT does anticipate a reduction in state gas tax revenues for several months due to the reduced fuel usage, the department is only expecting modest delays in construction projects due to this reduction.

TDOT Completes I-440 Project, the Largest in the Organization's History | Clarksville Now

Work crews began removing signs and cones late Wednesday night, completing the $154.8 million project approximately one month ahead of schedule. “It feels so good! We couldn’t be more thrilled that we are about to start opening lanes on 440,” said TDOT Community Relations Officer Kathryn Schulte to WKRN.

Phoenix to Pilot Material to Curb Heat Island Effect | ASCE SmartBrief
Sun-baked Phoenix is applying a light gray water-based coating to existing asphalt in a bid to reduce the heat island effect. A similar experiment with the coating in Los Angeles lowered street temperatures by 12 to 20 degrees Fahrenheit.  Full Story: The Arizona Republic
Views expressed do not necessarily reflect the policy or opinion of TN Infrastructure Alliance, its staff or members.
Posted by TN Infrastructure Alliance on Monday, June 29, 2020